The Advantages of the GYNIUS PUNCH 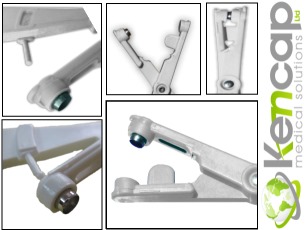 What is Cervical Biopsy?

A cervical biopsy is a test in which tissue samples are taken from the cervix and examined for disease or other problems. The biopsy identifies the abnormality when a positive pap smear shows minor cell changes or abnormalities.

How to use the GYNIUS PUNCH?

The GYNIUS PUNCH is a cervical biopsy punch, used same as the well-known and familiar Tischler Biopsy Forceps. The procedure is done by a gynecologist or family medicine physician. The procedure itself is quick and easy, yet sometimes unpleasant to the patient. Using a speculum, the doctor will search suspicious tissue in the cervix, and take a small sample or several samples if needed.

Once the sample is cut, the GYNIUS PUNCH is taken out of the vagina and the sample is placed in to a vessel (laboratory dish or plastic tube). For easy removal of biopsy sample, opening the handle (after cut) all the way until patented pin enters the biopsy disk will extract sample.

In some cases, during the biopsy procedure bleeding may occur, and needs to be treated with “Monsel’s” liquid or silver nitrate which will stop the bleeding.

Once sampling is finished and the procedure is done, the GYNIUS PUNCH is to be disposed of to an appropriate bin.

The GYNIUS PUNCH is a single use instrument, and must not be used again or resterilized.